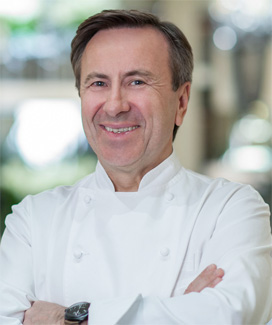 The United Way Miami Wine & Food Festival is marking its 18th year in a big way – by changing its name to VERITAGEMIAMI and bringing in one of the world’s most celebrated chefs, Daniel Boulud, to headline the four-day event, April 17 – 20, 2013. The new name reflects the evolution of the event, which over time has become much more than simply a food and wine festival.

“VERITAGEMIAMI is where food, wine and friends come together for a greater purpose with uncompromising quality and fun,” said Harve A. Mogul, president and CEO, United Way of Miami-Dade. “VERITAGEMIAMI is the place to be for people who enjoy great wine and food experiences, engaging with one another and doing good for the community.”

Bringing added excitement to this year’s gathering is Chef Daniel Boulud who will be the featured chef at the popular Friday, April 19 interactive dinner taking place at the JW Marriott Marquis Miami; home of Boulud’s Miami outpost of db Bistro Moderne. The ultimate good time for foodies, Chef Boulud will guide more than 600 guests in the preparation of a three-course meal at their tables.

Chef Boulud is considered one of America’s leading culinary authorities and one of the most revered French chefs in New York, the city he has called home since 1982. He is chef-owner of flagship DANIEL, the refined Relais & Chateaux, three Michelin-star restaurant, as well as Cafe Boulud, db Bistro Moderne, DBGB Kitchen and Bar, Bar Boulud, Boulud Sud and Epicerie Boulud. Chef Boulud combines his warm hospitability with the soulfully satisfying traditional cooking he grew up with on his family’s Rhone Valley farm in Lyon, France. His restaurants in Miami and Palm Beach as well as in London, Singapore, Beijing, Montreal and Toronto reflect ingredient-driven seasonal French-American cooking. Boulud is the author of seven cookbooks, the recipient of three James Beard Foundation awards, including Outstanding Chef and Outstanding Restaurateur, and was named a Chevalier de la Legion d’Honneur by the French government, as well as Chef of the Year 2011 by The Culinary Institute of America. He is a generous and energetic supporter of Citymeals-on-Wheels, serving on their board of directors since 2000 and is also co-founder and Chairman of the Bocuse d’Or USA Foundation.

Chef Boulud is not the only Michelin-star chef to participate in VERITAGEMIAMI. On Saturday, April 20, Chef David Brovelli of II Sole di Ranco, a family-owned Relais & Chateaux property on Italy’s Lake Maggiore, will prepare an Italian-themed dinner, paired with award-winning wines. The dinner will take place at the Orion Jet Center, a restored 1940s hangar at Opa Locka Airport, and will feature a live auction.

The other VERITAGEMIAMI festival events include: a craft beer tasting on Wednesday, April 17 at Wynwood Walls in the Wynwood Arts District; as well as a walk-around wine tasting on Thursday, April 18 at the Village of Merrick Park. For more information or to purchase tickets go to www.veritagemiami.com.

Since its beginning 18 years ago, the United Way Miami Wine & Food Festival, now called VERITAGEMIAMI, has raised more than $12 million for the community.  All proceeds from VERITAGEMIAMI support United Way’s work in education, financial stability and health.