A Letter From Africa


Written by VeritageMiami Director Lyn Farmer
A Letter From Africa

The wine loving traveler often faces a dilemma – drink a wine you know for guaranteed pleasure or go rustic and local where you have an equal chance of being thrilled by a new discovery or simply discovering there is a reason you never before had a wine from this place. I’m an adventuresome traveler by nature so I invariably go for the latter option, eschewing the comfort of cab, the zing of zin, the beauty of Bordeaux for the, oh, I don’t know, but that’s the point isn’t it? If travel is about discovery and not simply relocation of the expected, you often won’t know what you are in for until you get it.

Case in point: I just got back from Africa, a continent I was thrilled to see and where I especially welcomed the opportunity to try a variety of cuisines, almost none of which have wine as an integral part of their presentation. I began my trip in South Africa, where a significant local wine industry is slowly going global. I spent part of my time with Jenny Ratcliffe-Wright and her husband Darryl – he is an international banker working on development projects throughout Africa and she is editor of a wine magazine and part-owner with her mother and brother of the highly regarded Warwick Estate Winery in Stellenbosch. Jenny led a tasting, and she and I co-hosted a wine dinner featuring some of Warwick Estate’s excellent wines – I particularly liked the Professor Black Sauvignon Blanc and two rich and elegant reds, one a Cabernet Franc and the other a Bordeaux Blend. It’s available in the US – in South Africa, the blend is called Trilogy, but in the US it is known as Warwick Estate Reserve because Trilogy is already used by Flora Springs Winery for their Bordeaux blend. 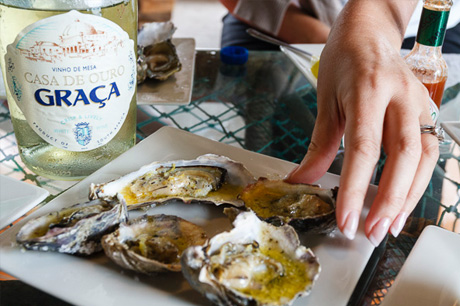 Graça and Oysters, a serendipitous benefit of travel

Many of the South African wines I’ve had in the past have struck me as rather thin and short on the finish, simple rather than complex, but these and several others I tried were denser. The South African style still strikes me as light, but in the sense of elegant and not devoid of fruit. Later, we moved up the West Coast of Africa to Namibia. A sparsely populated country best known for wildlife in the interior and spectacular dunes along the coast, Namibia struck me as lacking promise for a wine lover – one look at those dunes and I was reaching for a beer. But Jenny and Darryl knew a place we had to visit, the dusty and uninspiring port town of Lüderitz where I was told there were no interesting restaurants except a single ramshackle building on the coast.

The building was part of a compound that despite its dusty appearance at the edge of a desert had an important claim to fame. “All over Southern Africa,” Jenny said, “Lüderitz oysters are famous.” They farm them in Lüderitz, a settlement I imagine has changed very little over the hundred and some years since it was founded by German immigrants. And sure enough, in walking distance of the port (though come to think of it, Lüderitz is so small, everything is in walking distance), we found the oyster farm and a smiling fellow who anywhere else would be acclaimed for the extraordinary speed with which he can shuck oysters. His knife flashed and in less than five minutes we had four plates containing a half dozen oysters each just plucked from the farm tank and quickly dressed – some plain, others warmed through with lemon, herbs and Parmesan cheese or quickly broiled with bacon.

I was thinking how nicely the Warwick Sauvignon Blanc would compliment the oysters but Jenny said my local education would continue with Graça, a South African wine made from Chenin Blanc and sold in a distinctive, squat bottle. “It’s a cheap imitation of Vinho Verde,” she said then laughed – she didn’t really intend for us to drink it and Darryl pulled a Warwick Chardonnay from his bag. Graça is South Africa’s quintessential backyard barbecue wine – acidic and a bit thin (marketed as “crisp and refreshing” on the label) and relegated to the same condescending status among South Africa’s connoisseurs as White Zinfandel receives in the US. But I insisted we try it for the local color (it is one of the best selling wines in both Namibia and South Africa) and I confess to actually liking it. Not on its own – it was acidic enough to strip enamel from teeth, but with the oysters the light fruit and racy acidity played off the bivalve’s brininess in an admirable bit of culinary counterpoint.

It would have been easy to pass on the Graça and go for the Chardonnay (which we ended up having for dinner that night), but I would have missed two important benefits of travel: the opportunity to taste as the locals taste, and a great lesson in location – invariably local wine and local foods go together. As I write this from the comfort of my sofa two weeks later, I can still taste that “crisp and refreshing” wine, and if I could have another plate or two of those Lüderitz oysters, I’d pick up another Graça to go along. For the equivalent of less than $5 a bottle, it’s a pretty great experience.

Jenny and Darryl flew home the next day as I made my way up the coast of West Africa. I was aware of no local wine in Namibia, Ghana and Senegal though I discovered Senegal has a good selection of wines from Algeria and Morocco (the rosés are very nice) and it turns out Ghana has a considerable cottage industry in “Palm Wine.” This concoction is not wine, but the fermented then distilled sap of a local palm tree. Potently alcoholic, unregulated and with an appearance rather like swamp water, I figured in a country that insists tourists get vaccinated for yellow fever before visiting I should leave the swampy jungle moonshine alone. My appreciation for Graça grew with every passing day. 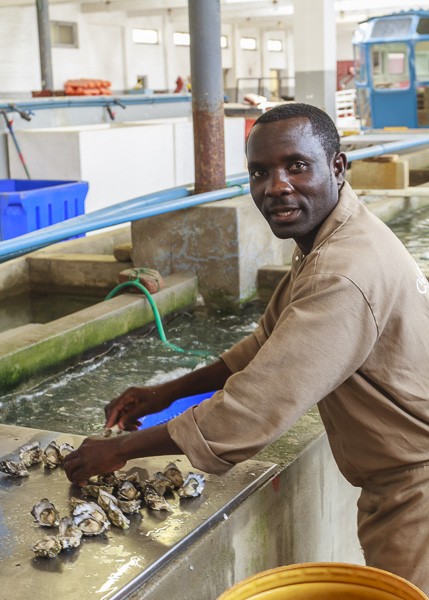