All of us who work at United Way of Miami-Dade preparing for VeritageMiami think of this as an all-year event. As soon as the final event of one series concludes, we are already beginning preparations for the following year. It always comes as a bit of a shock when I realize there’s less than a month to go before the first of the annual events takes place – that everything our team has been preparing for is right around the calendar corner.

And so today, I want to remind you we are in VeritageMiami countdown mode – one event is already sold out and tickets are going fast for the other two. Since there are still a few places left, let me focus on those two to encourage you to make a plan now, and to join us in supporting the great work of United Way in our community. 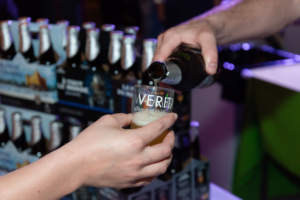 First up in two weeks is the Craft Beer Tasting. We’ve been staging this event for the past several years at the vibrantly colorful Wynwood Walls and it’s hard to imagine a more conducive spot for sharing beers, ales, ciders and nearly two dozen great Miami restaurants. Given that the price for a general admission ticket tops out at $85, it’s a great bargain for the night before Valentine’s Day. I’ll have more on Craft Beer in next week’s blog, but don’t wait to get your tickets!

With the Interactive Dinner hosted by chef Giorgio Rapicavoli on February 28 sold out, your next opportunity to support the charitable work of VeritageMiami is the Farm to Fork Brunch on March 15. I’m really psyched for this event, the outcome of a conversation I had with my friend Michael Schwartz, the James Beard Award-winning chef behind Michael’s Genuine Food and Drink and half a dozen other great dining spots in South Florida. It’s been 10 years since Michael was our headline chef at the Interactive Dinner.

One afternoon, reminiscing at the bar of Michael’s Genuine, we got talking about how in 2010, farm-to-table was a radical and little-understood concept, but today it is taken as an entirely sensible, thoughtful and popular way to dine sustainably. That led to our conceiving of a brunch where each course will be prepared by a different chef with a true farm-to-table mindset. We quickly came up with a list of who we’d love to have join us, so I’m happy to say that Michael will do one course and he will be joined by other farm-to-table chefs for the other courses.

And finally, Madruga Bakery will provide the final course. What is farm-to-table about a bakery? Well, Madruga is unique in many ways, not least of which is they mill their own flour for many items at the bakery as well as using local fruit in many desserts. As a home baker, I have endless admiration for what the Madruga team accomplishes daily (and my consumption of their extraordinary croissants confirms that respect).

There is still time for you to participate in either or both of these events. Come on – put your money where your tummy goes and support United Way of Miami-Dade in the process. The beer and wine is on me! Here’s a handy link to follow and get your tickets, before these, too, sell out!