My Next Wine Project – Two Wines A Week for a Year

In the wine world, there are fewer events more eagerly anticipated than date Wine Spectator magazine releases its list of the Top 100 Wines of the Year. There are a lot of lists called “The Year’s Best…” but what is particularly intriguing about the Wine Spectator’s list, is what it stands for. 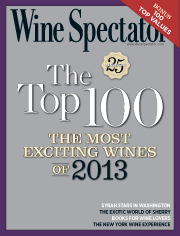 The list is not simply a compendium of the wines that got the highest scores during the year from the magazine’s reviewers – it’s much more interesting than that. In fact, the highest ranked wines are not at the top of the list. Reynvaan’s 2010 Syrah from Washington’s Walla Walla Valley earned 98 points, the highest score on the list, and was ranked number 11. Croft Vintage Port, from the exceptional 2011 vintage (a vintage I love partly because I was there treading the grapes), got 97 points and is ranked number 7. No, points only count for part of a wine’s appeal, and this is what I love about the Wine Spectator’s list. The ranking also takes into account value (which a point system almost never factors in), availability (ditto) and “excitement” – in other words, the wine has to have panache.

Thus, you’ll find the $11 Paringa Shiraz from Australia at number 52 with 90 points, and the most expensive wine on the list, the Château d’Yquem “Y” ($150) clocks in at number 98. There are another 96 wines on the list, and the good news is that more than half of them are less than $50 and fully a third are $30 and under. What this means is that even the most budget-minded wine drinkers among us are able to spend the next 12 months tasting through this list, two wines a week if you go for the full program, or one wine a week on a budget.

Oh yes – wine number 1. Tom Matthews, the gregarious managing editor of Wine Spectator and the magazine’s expert on Spanish wine, gleefully announced the top place wine – it’s a wine from Spain’s Rioja region, Cune Imperial Gran Reserva 2004. At $63 it won’t be for everyone’s Christmas basket, but Cune has many other, less expensive, reds that are sure to get some added attention thanks to this award. I’m sharpening my corkscrew already.

By the way, we are very pleased that Wine Spectator is a sponsor of VeritageMiami and will be taking part in the 2014 event beginning April 9th with the Craft Beer Tasting at Wynwood Walls. You can get all the details on VeritageMiami here, and to see the full Top 100 List, visit the Wine Spectator website – they generously include not only the wines, but all their tasting notes as well.

Of course, you need to put tasting notes in perspective. How? I’ll explain in a week in my next post on the VeritageMiami blog.