Raising the Bar, Raising a Glass

Last Friday, VeritageMiami raised the bar on our annual interactive dinners by having six chefs on stage for the first of two interactive extravaganzas this year. This event was called “Spring Edition” because we will have another interactive dinner in October, marking VeritageMiami’s move from our usual April date to a new annual date in autumn. In addition to featuring six chefs paired in three teams, for the first time we also paired wines with each course rather than featuring a variety of wines that won medals at the annual Best in Glass Wine Challenge – they were always wonderful wines, but whether they matched the food on the table was a bit of a hit or miss.

Pairing specific wines with each course gave us the opportunity to showcase how certain wines and foods go together, and it was an interesting exercise in compatibility. Let’s look at what made the pairings work.

First, we prepared out palates by featuring cocktails made with Atlantico Rum and with Zonin Prosecco for all the wine lovers. Prosecco in a sparkling wine made in Veneto, in northeastern Italy. This is a cool region and in cool climates grapes develop bracing acidity. Zonin is one of the region’s leading producers with a reputation for quality gained over nearly two centuries.

Prosecco is the name of a small town in the region of Friuli Venezia Giulia, and for many years it was also the name of the grape from which this wine was made. As Prosecco grew in popularity as a dry alternative to many semi-sweet Italian sparkling wines (like Asti Spumante), growers in other regions realized that if they planted the prosecco grape, they could also call their wine “Prosecco.” Understandably, the wine producers in Italy colpito il tetto (hit the roof). Their solution? They officially changed the name of the grape to its local name “glera” and declared Prosecco was a place name and therefore protected under European law. They fared much better than their neighbors in Champagne at ending the piracy of their prized name.

Zonin’s Prosecco is one of my favorites – I like the faint hint of almond in the fruity flavor, just a trace of bitterness that gives the wine a nice edge, and gives one’s appetite a nice edge as well, the purpose of any good aperitif. At 11 percent alcohol, Zonin Prosecco is refreshingly light on the palate – it is an uncomplicated aperitif and yet, it has enough nuance to allow it to be a good match with lighter foods. With its crisp acidity, it is a good match for ceviche, caprese salad and other starters that have a bit of vinegar or citrus juice that can undermine many wines. 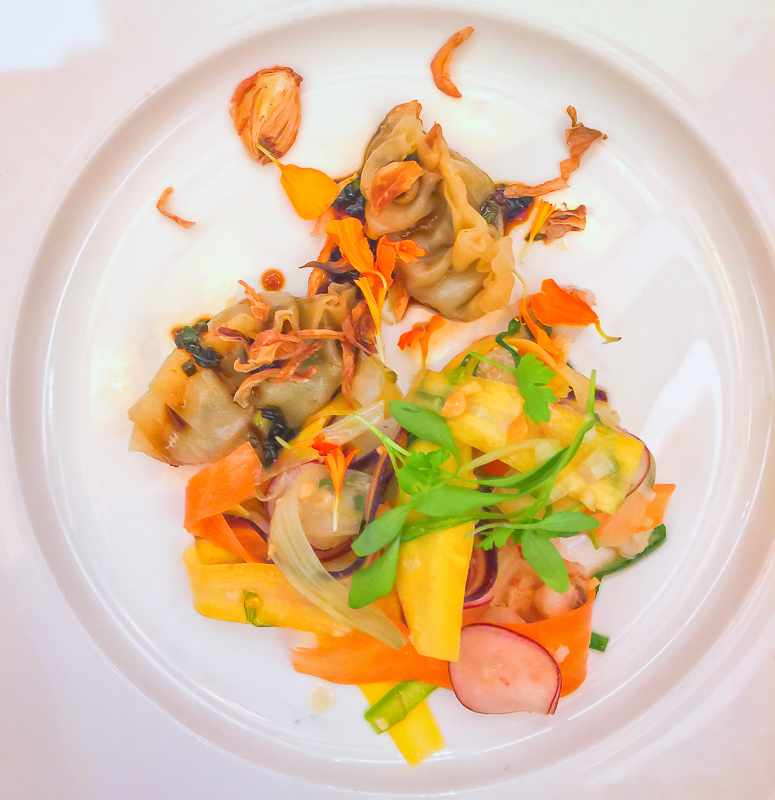 With the dinner, the tricky pairings began. One issue posed by the dishes on the menu was complexity: each plate was a collaboration between two strong-minded chefs who each also wanted their personality to show while meshing with their colleague. In the first course, Chef Julia Ning wanted to showcase the Latin-Vietnamese fusion cuisine that is the foundation of her new restaurant Phuc Yea, a pop-up that is finally going the brick and mortar route. She was cooking with her friend Nicole Votano, an eclectic chef who is focusing these days on sustainable agriculture and carefully chosen local ingredients at her Miami Beach restaurant DIRT//Eat Clean. Julia made dumplings stuffed with veal cheek and foie gras and Nicole added a salad of shaved local vegetables, including asparagus, a veg that is not an easy match with wine.

Further complicating the dish were two sauces – Julia called for a drizzle of dipping sauce made from a reduction of Dr. Pepper soda, soy and black vinegar, while Nicole added a dressing for the vegetables called peanut nuoc cham, a combination of sugar, lime juice and umami-laden fish sauce. The combination of sauces was delicious but potentially tricky for the accompanying wine – we required something that would stand up to food with strong flavors and a bit of rich texture from the veal and foie gras, but that was still essentially a salad with a tangy dressing.

What we needed was a wine that had crisp acidity to pair with the foie gras and match the acid components of the sauces (not to mention the hint of sweetness from the Dr. Pepper reduction) and a fresh minerality and enough flavor of its own to match the fish sauce and flavorful, slightly sweet seasonal vegetables. I found all these requirements in a vermentino from Tuscany, a beautiful wine from Rocca di Montemassi called Calasole.

Vermentino is a grape that for many years only flourished in the vineyards of Sardinia, off Italy’s Mediterranean coast. In recent years, enterprising vintners have been planting it on the mainland in coastal regions that are not really so far away from its Sardinian home. In the Tuscan region of Maremma, south of Livorno and Pisa, the gentle warm ocean breezes (one of which is named “calasole,” hence the name of the wine) help the grapes ripen slowly so they develop flavors of apple and citrus, plus some dry minerality and a subtle hint of stone fruit (white peach, for example). These flavors are backed up by crisp acidity that gives the wine the sort of focus we needed to match with the deceptively complex flavors of Julia and Nicole’s dish.

I liked the pairing very much – this is a wine that is as versatile as it is tasty. If you want to read more about the wine, Rocca di Montemassi. The good news is that the other pairings worked out just as well. Next week, I’ll walk you through those combinations, and share the recipes for all three dishes as well.