After months of behind-the-scenes work by more than 100 people, VeritageMiami made a big splash last week, raising hundreds of thousands of dollars for our community.  I was going to title this post “Tasting for Good” since that what we wine lovers did during the four days of events, but we were also tasting good because of the quality of wines and beers that were made available,  thanks to the community involvement of so many people in the wine and beer trade.

We consumers focus on wineries and wine makers and brewers and breweries and seldom hear about the people who actually bridge the sometimes considerable gap between the producers and us consumers. It is the hard work and generosity in the community of the distributors and wholesalers that you probably never heard of that actually gets the liquid to our lips. So in my first post-VeritageMiami post I want to give a special shout out to those “middle men (and women)” who made the event possible.

The largest distributor in our area is Southern Wine and Spirits and its affiliated companies (most important to VeritageMiami is the Transatlantic subsidiary). Equally involved in VeritageMiami is Republic National Distributing Corporation, followed by Premier Beverage and then a group of smaller (one might say boutique) distributors, often with very specialized portfolios. Among beers, Republic National has an important portfolio along with beer specialists Gold Coast Distributing and Brown Distributing, all of whom were generous participants in VeritageMiami. 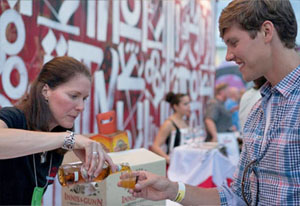 How does it work? Let’s say you were one of the 1,000 people guests at our Craft Beer Tasting at Wynwood Walls and discovered a brew you didn’t know before but then found yourself falling in love at first taste. Or perhaps you were among the 1,500 people at Merrick Park Thursday night for the Fine Wine Tasting and had a white wine you adored (and you thought you didn’t like white wine!), or a new red from an area you know but a producer you never heard of. It’s the distributor who helped us get that wine onto that table – there were more than 300 wines poured this year and close to 100 different beers at Wynwood Walls. And if you didn’t make it to either tasting event or the two amazing dinners (more on those in a future post), you may very well discover some new wines and beers because friends went and are now raving about their discoveries, or your retailer came and found some new producers for her shelf.

Of course, it’s not altruistic – the distributors hope you find wines you like and that you will purchase them even though they are pretty transparent in the process. Except they aren’t transparent to the retailer – your favorite wine shop or spot to find craft beers has to go to the distributor to get the products you ask to buy. VeritageMiami is a great opportunity for the distributors to showcase new products and confirm the excellence of leading products in the market. Participating in an event like VeritageMiami can be a win-win (or a wine-wine in my case) but it still involves that crucial middleman making an investment in time and resources (and marketing dollars) to bring those wines and beers to our event and give you a taste. 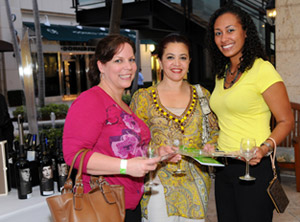 The best way for you to say thanks for the effort is to make a point of telling your retailer you want a wine or beer you tasted at VeritageMiami. Yes, distributors and wineries and breweries participate to give back to the community – after all, the middlemen and women live and work here too and want our community strong and vibrant. They are also business people who carefully allocate their resources and so they need to know their investment in VeritageMiami was a good investment in consumers as well as the community.

So say it loud – on your social networking sites and when you go to a retailer or to a restaurant (another big component of VeritageMiami): you gave to the community by attending VeritageMiami, and the community gave back by finding you some wines and beers that rock!  And, for the next 30 days, the wines that were poured at the Fine Wine Tasting are available for purchase at wine.veritagemiami.com.