As we commence 2020, I’m reminded of just how personal a business wine can be. It is a global industry but in a very real sense enjoying wine is also a one-on-one pursuit. There is a wonderful scene in one of my favorite films, “A Good Year,” in which Uncle Henry, a patrician landowner in the South of France (wonderfully played by the late Albert Finney) tells his then-young nephew about the magic of wine. Speaking of the dialogue a good wine can elicit with its consumer, he says, “I enjoy making wine because this sublime nectar is absolutely incapable of lying. A bit too early, a bit too late, it matters not. The wine will always whisper into your mouth with complete unabashed honesty every time you take a sip.”

I think of that perceived honesty with which a wine “speaks” as a direct link from place to palate. You may be sitting by a fire trying to ward off winter’s chill, but a glass of grenache from the Côtes de Luberon (where Uncle Henry’s fictional wine was produced) will whisk you to a day of golden sunshine just before harvest. This is why I say wine is a one-to-one dialogue between the taster and a grape, a vine and a producer. There may be a lot of chemistry and technology involved but at its most basic level, wine is much the same as apples or carrots: it is the land speaking to you.

I have thought of this a lot during these first days of the new decade. Devastating bush fires in several parts of Southeastern Australia have caused a terrible loss of animal life and destroyed many important vineyard areas. This has been devastating news on a very basic level for many Australian wine producers and portends shortages for fans of Australian wine for several years to come. I have traveled to most of Australia’s wine regions and my heart aches to see the devastation faced by people I know and love.

And then this past weekend I learned the “Pope of Beaujolais,” Georges Duboeuf, died on Saturday (January 4, 2020). Georges (on being introduced, he insisted you call him by his first name) was born in 1933 and from the early 1950s on, he was a strong promoter of his native Beaujolais region at the southern tip of Burgundy. When he began in the business, most producers sold their wine in tanks or barrels and let merchants do the bottling. He successfully pushed for producers to do their own bottling, thus guaranteeing a greater level of accountability and authenticity.

Duboeuf became by far the most commercially successful producer in the Beaujolais region, but not without some controversy. In creating an international demand for Beaujolais Nouveau, he commercialized a relatively minor local tradition of selling off some very young, “new” (thus nouveau) wine. He did this at a time the region was struggling financially, and definitely brought it commercial success but at the cost of having much of the world think this simple new wine was all Beaujolais had to offer. Beaujolais is still trying to come back from that misperception of the region’s wines. 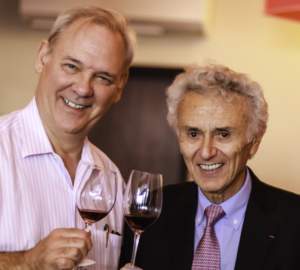 Beaujolais is a region of small estates and mostly small producers who do not have the resources to dowidespread promotion. As the largest producer in the area, Duboeuf did have the resources to make an international impact, and he used his visibility to not only promote his own wines, but the wines from throughout the appellation. I first met him in the early 1990s and through an evening-long (and literally) one-on-one tasting with him, I fell in love with the wines of Beaujolais and especially one “cru” (a village known for its quality wine) in particular, Fleurie. On subsequent meetings he opened up the depth of Morgon to me and what he called the “poetry” of Chiroubles and Julienas and the other crus that are the real soul of Beaujolais. There will be a lot written about the impact Duboeuf had (and still has through his son Franck), but more than the global impact, what I will remember most is the personal impact, and what an elegant translator he was as his vines spoke to me with “unabashed honesty.” Georges Duboeuf was a wonderfully personable man, a true gentleman who never tired not only of sharing what he knew but of making the effort to learn from consumers about our reactions to the wines of Beaujolais.

This is the one-to-one wine experience at its most insightful. It’s an experience we can each have when we stop by a favorite wine store and meet a winemaker, or learn a friend is particularly passionate about a wine. This is, in fact, the experience we try to capture every year at VeritageMiami and now that we are fully into the 2020 wine season, I look forward in the coming weeks to sharing our plans for the Craft Beer Tasting on February 13 (where you can meet many brewers), the Interactive Dinner on February 28 and the Farm To Fork Brunch on March 15. There’s so much to share, one-on-one!