1998 – The festival comes together


Written by VeritageMiami Director Lyn Farmer
1998 – The festival comes together

We started tracing the history of what today is called VeritageMiami with the introduction of two auctions in 1996 and 1997, both called The Great South Florida Fine Wine Auction. Both years, the event included a dinner with some top chefs but that was the extent of the event – a single evening with an auction featuring wine, travel and lifestyle lots, and coincidentally, both years the auction brought in about $210,000.

Even as the second auction was in its planning stages, another player was talking about bringing a wine event to the area. The historic Biltmore Hotel in Coral Gables was constructed in South Florida’s first land boom in the 1920 and, modeled after the Alhambra in Spain, became an icon of what was called Mediterranean Revival architecture. The Biltmore had gone through several ups and downs and by the early 1990s was looking to reestablish itself as a glitzy, upscale destination and one way to do that was with wine and food, leading to the creation of The Cellar Club.

In a bit of behind-the-scenes trivia, let me digress and point out that from the early 1980s until 2009, one of the country’s most admired wine magazines, The Wine News, was published in South Florida. It had international visibility and for 20 years, I was a senior editor for the magazine, reviewing wines, writing a column for every issue and one or two cover stories every year. The Wine News had its editorial offices for a time at The Biltmore Hotel in the mid-1990s and its presence there spurred the hotel’s decision to cement its reputation as a beacon for wine lovers in South Florida by creating the wine club and wine bar in 1995.

So, back to the Great South Florida Fine Wine Auction. The two benefiting charities wanted to raise the event’s visibility and net income. Many of the auction’s leading volunteers, including most South Florida wine collectors, were also members of The Cellar Club and over numerous glasses (well, probably bottles) of wine, two needs coalesced: the charities’ wish for a higher profile event and the Biltmore’s wish to increase its presence as a fine wine destination. The result was the inception of a full weekend of events that would encompass an auction as well as cooking demonstrations, dinners and wine. Thus, two months after the second Great South Florida Fine Wine Auction in February 1997, The Biltmore Hotel and The Wine News magazine staged what was essentially a trial run of a new festival in April 1997 and wine lovers in the area felt they’d struck the vinous mother lode. 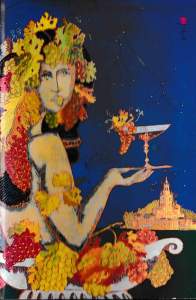 Looking back, we have generally considered the 1997 Biltmore festival as our beginning and the one from which we count our 25 years, but it was the second Biltmore International Wine Festival in 1998 that first presented a true and lasting concept to the public. All the elements that marked our festival going forward are there, plus a few that have been amended or dropped along the way. 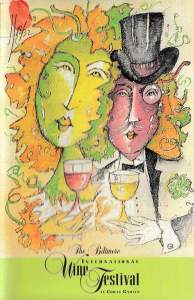 The 1998 weekend began with a Friday golf tournament followed by a winemaker lunch, a Bordeaux wine seminar and then the important wine tasting that was a signature event for many years. Fifty wineries and 12 South Florida restaurants participated creating an enormous amount of local support and enthusiasm for the festival. This, more than any of the more formal events, had the feeling of a “festival.”

On Saturday at noon, local star chef Norman Van Aken, one of the pioneering “Mango Gang” of South Florida chefs attracting national attention, offered lunch with a twist: he was on stage, and each table of 10 guests had its own cooktop to make the three-course lunch along with the chef. This was originally conceived as a fun way to add a twist to the festival, but over the next couple of years, this “interactive cooking experience” became the signature component of the entire festival.

Saturday night, the Great South Florida Fine Wine Auction and Gala Winemaker Dinner (we had a penchant for convoluted names in those days) was held with Napa Valley and Sotheby’s auctioneer Fritz Hatton on stage. Fritz is a musician, a winemaker and one of the country’s greatest wine auctioneers and he quickly became a regular for the next several years. With his urging the 600 attendees drove the bidding to more than $360,000, immediately place the auction among the top 10 charity wine auctions in the country.

The next morning, the weekend wrapped up with a Champagne brunch after which the now combined third annual Great South Florida Wine Auction and second annual Biltmore International Wine Festival netted more than $500,000. It was a stellar event on many levels: the net to the charities was significant and it brought together several segments of the community in an invigorated vision of how wine and food could drive civic and charitable involvement. And of course, that involvement continues to this day with the 2021 VeritageMiami happening as a hybrid IRL (in real life) + virtual combination.

Visit the festival homepage for details. Let’s carry on that pioneering spirit into a 26th year!