Following the successful close of the Miami Wine and Food Festival in spring 2006, the event’s success was exhausting those who staged it.

The reality is that large charities need to stage events throughout the year to generate both participation and to maintain visibility. One mantra I heard frequently was, “the week of the event everyone knows you, but 51 weeks a year no one ever heard of you.” It wasn’t quite that stark, but by this time, the “wine festival” (it included food and lifestyle, but in-house, it was always “the wine festival”) required attention throughout the year. Unlike many events the two charities staged, this was one event in name, but in practice, it was three events spread over a weekend, each attracting a slightly different demographic.

The wine tasting on Thursday night at Merrick Park drew a crowd of more than 1,200 people and, thanks in part to a huge variety of wine on offer as well as its attractive ticket price (a steal at $75) was very appealing to a young audience. The Interactive Dinner, now called “Food, Friends & Fun”, on Friday night was a raucous, infectious good time that, despite a high-ticket price, had grown to more than 600 attendees looking for a fun time with great food. And then there was the dinner (and sometimes both a dinner and dinner dance) on Saturday night that featured the auction that supplied most of the net income for the charities. This also commanded a high-ticket price and attracted a crowd that dressed in formal wear for a fashionable night out.

By Sunday, the staff was exhausted after working three long days and, while the audience was ready to relax, the event team was already hard at work on another event, often coming up in just a few weeks. It was tiring and after a lot of discussion, the two charity partners that had created the event and carried it forward for a decade decided to part ways. Baptist Health South Florida Foundation wanted to focus on other, less staff-intensive events and United Way of Miami-Dade, with a larger event staff, took on sole ownership of the festival while still looking to broaden its base. 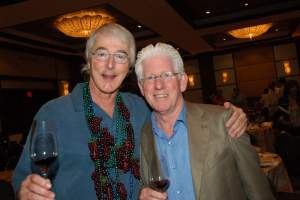 Festival Chair Bob Dickinson with Bill Talbert of the Greater Miami Convention and Visitors Bureau at the 2007 Food, Friends and Fun

A key player in the decision to broaden the base was Bob Dickinson, a nationally influential wine collector who was also president of Carnival Cruise Line. In addition to wine, Bob’s great passion was supporting two South Florida charities, United Way of Miami-Dade and Camillus House. With his encouragement, Camillus House became a partner beginning with The Twelve Annual Miami Wine and Food Festival in 2007. 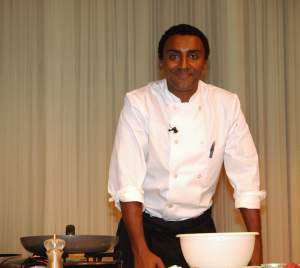 Marcus Samuelsson, our Interactive chef in 2007

The festival kicked off Friday, March 22 with the Taste and Toast Fine Wine Tasting at Merrick Park, continued with the Interactive Dinner headlined by Marcus Samuelsson. Samuelsson, an Ethiopian refugee raised by adoptive parents in Sweden, had a compelling story that added a lot of human interest to his significant cooking cachet at a string of New York restaurants, but 14 years ago he wasn’t nearly so well known outside Manhattan as he is today. For many in our audience in 2007, his sparkling personality, humble demeanor and dazzling cooking skills were a revelation and he was a wildly popular chef on both Friday and then again Saturday when he and InterContinental Miami’s executive chef Alex Feher created a memorable meal for the first auction lunch.

Staging the auction as an afternoon event was aimed at creating a less formal event than the black-tie dinner auctions of the past. Fritz Hatton again presided over the offering of 61 lots in the live auction (and many more in an extensive silent auction) that started at 12:30 and went on past 4 pm before the final gavel came down. To be honest, the auction that year was a struggle, and ended up being a one-year experiment that everyone agreed lacked some of the enthusiasm of past evening events, so in 2008, we returned to the classic auction dinner format.

In 2008, and back to an evening auction, we also pared down the list of auction lots in response to some patrons feeling the auction went on too long. It has always been a balancing act between packaging a great evening of entertainment that has a definite flow and the need for the charities to maximize yield so we held the auction to 51 lots. 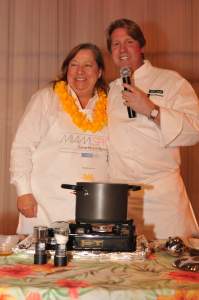 Nelly Farra with chef Stephen Lewandowski at the 2008 Interactive Dinner

At Friday’s Interactive Dinner, our guest chef was Stephen Lewandowski, a dynamic young American chef who held the influential executive chef position at Tribeca Grill in New York. Like many younger chefs we worked with, Lewandowski embraced the interactive concept with gusto and created a terrific menu that many of us went on to duplicate at home – I had his curried chick pea and tomato soup and his black trumpet mushroom-dusted lamb loin on my dinner party rotation for a couple of years after that evening!

The Fourteenth Annual Miami Wine and Food Festival opened on April 23, 2009, with Taste & Toast at Merrick Park. By now this was as memorable a signature event as the Food, Friends & Fun Interactive Dinner and, to some extent, dictated our event timing. Miami has gradually become less seasonal than it once was but we are still aware that many winter residents head north as the weather warms. With several religious holidays in the spring also limiting dates and the propensity of Miami weather to get very warm and rainy by early May, we’ve generally stuck with dates in March or April. This year was one of our latest events and, because of a schedule conflict at InterContinental Miami, we had to move the Interactive Dinner to the then-new JW Marriott Hotel Miami in downtown. 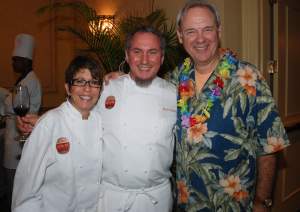 For the Interactive Dinner on Friday, April 24, we featured the dynamic duo of Michael Schwartz and Hedy Goldsmith. After several years heading up area restaurants for other owners, Schwartz had recently opened his own place, Michael’s Genuine Food & Drink with Goldsmith as his pastry chef. Our standard program in the past had been to have our celebrity chef lead the audience in preparing three courses, and then Feher’s team at the InterContinental would prepare a dessert suggested by the chef. But with Schwartz, we also had a world-class pastry chef in the mix, so we featured four dishes on the Interactive lineup. It was a stellar evening to pave the way for the following night’s auction and, not incidentally, Schwartz went on a year later to win the prestigious James Beard Foundation Award as best chef in the South.

It’s high time I shared some of these recipes with you, so next week I’ll take a look back over some of my favorite recipes (and favorite chef stories) from the first half of the festival’s life. It will be an epic multi-course extravaganza spiced up with a little behind-the-scenes gossip!