2010 – Giving the event an English accent

We have had a single vision from the very beginning of this event – to raise funds for and awareness of the mission of United Way of Miami-Dade. We were the first major and annual charity wine and food festival in South Florida and while many others have come (and some gone) over these past 25 years, this event’s mission has been constant. The name, however, has not – there have been a lot of tweaks to the festival’s name!

As we’ve added partners and venues over the years, we’ve made name changes to reflect who and where we are, from the Great South Florida Fine Wine Auction to the Miami Wine & Food Festival. We started as a single-day auction only (see my first post in the series) but quickly moved into a multi-day event and were well established by 2010. The Taste & Toast Fine Wine Tasting at Merrick Park was hugely popular, especially with some of our younger supporters, thanks to a relatively low entry cost – most years it was just $75 for a general admission ticket (there was a VIP ticket that allowed earlier entry for a higher price) that gave tasters access to as many as 75 wineries pouring samples plus 20-25 restaurants offering tasting bites to pair with the wine.

This is a good place for me to mention what I think of as a hallmark of our event and one reason for our success with wineries over the years. Wineries participate in events like ours partly out of a sense of community engagement but also for visibility. Many of the winemakers and representatives I spoke with noted that while some wine events just end up like a wine-filled free for all (they used the term “drunkfest”), our event was spaced out in such a way and our clientele was such that they would stop and chat with producers, ask questions about the wine and, in general, taste thoughtfully. This meant, to be blunt, they’d remember what they tasted and what they liked the next day and could become customers, which meant the event was a win-win for all concerned. 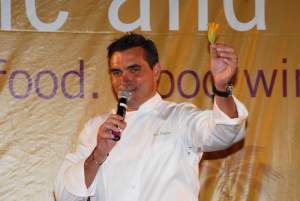 The highlight of 2010’s festival was having chef Todd English join us for the Interactive Dinner. English, with his movie star looks and larger than life personality, pushed us to new levels of culinary creativity with a dynamic menu and an energetic presence that prompted us to create an auction for Friday night’s dinner as well as the customary Saturday event, and both were a great success for both beneficiaries, United Way and Camillus House. 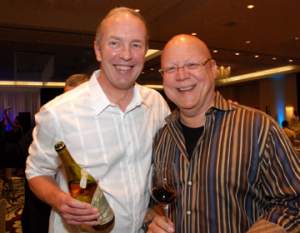 Two interesting things happened after the 2010 festival: Camillus House, who had partnered with us for several years, decided to do their own, separate event leaving United Way of Miami-Dade as the sole organizer and beneficiary, and Dan Hanrahan, then the CEO of Celebrity Cruise Line, joined our board as chairman. Dan was an incredible visionary, a wonderfully outgoing campaigner for the event and also very organized and imaginative. Under his leadership, we pushed forward with ever more innovative events, and in the process changed the name to reflect our ownership and became the 16th Annual United Way Miami Wine & Food Festival. With a new push for sponsorship (ticket fees only cover part of the cost of staging events 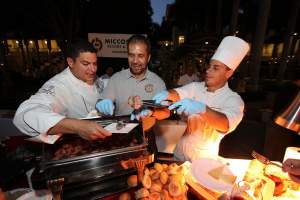 like this) the Miccosukee Tribe became title sponsor of the Merrick Park tasting event; Bacardi USA joined us as the title sponsor of the Interactive Dinner, this year called, “Food, Friends and Fun,” and featuring popular local chef Dewey LoSasso. And in addition to the Saturday evening auction dinner, we added a fourth event to the festival, a craft beer festival.

Looking back, this was an exciting option that has helped solidify our support with younger attendees and also helped us embrace a terrifically innovative part of the beverage industry. That first year, the Craft Beer Tasting was a Sunday afternoon event held at Mary Brickell Village. It was a huge success, especially in the eyes of the beer industry, which told us they seldom encountered so professionally managed an event. That tasting began a love affair between us and the craft beer industry that continues to this day as we have for 10 years now welcomed more than 40 brewers to the festival. 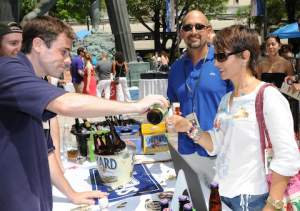 In 2012 a scheduling conflict with our usual home at the Hotel InterContinental led us to stage the festival at the Fontainebleau Hotel on Miami Beach. We preceded the Interactive Dinner with the Craft Beer Tasting, moving it to Thursday night as our opening event, then followed up with the Merrick Park tasting on Friday. Kevin Sbragia, a winner on Top Chef (he took home the honors on Season 9) joined us for the Interactive and created a stir by featuring a liquid nitrogen-frozen ice cream for dessert. The room was filled with fog for a bit but it was terrific fun.

Saturday, the fun at the Fontainebleau continued with a great meal prepared by Thomas Connell, the hotel’s executive chef, and the auction was a great success, though the consensus among many contributors was that staging the event on Miami Beach didn’t really fit our profile. We’d always been on the mainland and they pushed for a return. Little did the staff realize just how much of an about-face that return would be as the following year brought us not only a change of venue but a new name as well. But that is a story for another time – next week to be precise, when I’ll be back with another look at how we, soon to be officially known as VeritageMiami, came to be 25 years old.