As I wind down this series of blog posts tracing the 25-year history of VeritageMiami, I turn to 2016 and 2017 because it was such an unusual period for us. After the 2015 VeritageMiami, we decided to move the festival from our tradition spring staging to the autumn. It seemed a good idea to focus the event near harvest time in the Northern hemisphere and it would also move us away from several wine festivals that had cropped up in South Florida following our early success. When we began in 1996, there were no other festivals to speak of; by 2016 it seemed every charity in the region thought holding a wine and food event was a sure-fire path to success. We also thought an autumn event would let us catch seasonal visitors to South Florida as they were arriving for a winter residency rather than in spring just before they left to return north for the summer. What we didn’t count on was a late-season hurricane, Matthew, that descended on South Florida the October weekend our event was scheduled.

As Matthew barreled down on us, we quickly postponed all the events scheduled for October 5 – 7, 2016 including the Craft Beer Tasting at Wynwood Walls, our Fine Wine Tasting at Merrick Park and the Interactive Dinner on Friday, October 7. Unfortunately, while the hurricane shifted course and passed without doing grave damage to South Florida, we had a hard time rescheduling the events. All venues were booked for the year-end holidays and early in 2017 we couldn’t get three or four consecutive days available at our venues. We ended up scattering the events to dates several weeks apart, only to discover this was not only much easier on our hard-working staff, but the audience appreciated a more spread-out approach as well. What started out as a necessary effort at making up an event turned into a huge success as if we’d planned to stay in springtime all along. 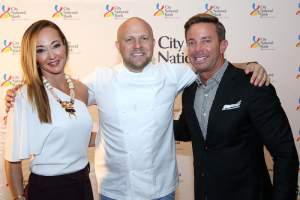 Jeremy Ford, the recent winner of the Top Chef Season 13 who we had booked for the autumn was fortunately was fortunately available for our new date in the spring of 2017. Jeremy turned out to be a wonderful collaborator who threw himself into the event despite a heavy schedule lingering on from his Top Chef obligations. His appearance marked the start of an ongoing relationship that sees the gregarious chef participating in VeritageMiami nearly every year despite his hectic media-heavy schedule.

Sadly, the rescheduled event in 2017 was the last time we staged our wonderful Fine Wine Tasting at Shops at Merrick Park in Coral Gables. I always loved this tasting because it was reasonably priced and gave both our festival and our audience a wonderful opportunity to have regular connections with the South Florida wine trade. We didn’t charge wineries and distributors to participate and, unlike all the other major festivals in the area, this one was open to all distributors regardless of size. We continue to look at ways to bring the event back to the VeritageMiami roster of events in the future. 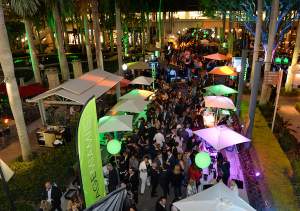 Another event to which we bade farewell during this period was the Best in Glass Wine Challenge. Charity events face a challenge – the week or two they take place they are on everyone’s radar, but for 50 weeks a year events struggle for attention and we organizers worry many people forget our events because other current projects are commanding their attention. One way to battle the challenge is to stage mini-events throughout the year to keep one’s name, image and mission in front of people. Best in Glass let us do this in a unique way: it was a sommelier-judged wine competition but rather than invite all the major players to participate, our idea was to only take entries from wines that were priced at a level that would permit them to be featured by-the-glass at area restaurants.

In practice, this meant we only accepted wines that had a wholesale price lower than $20 per bottle. The rule of thumb for by-the-glass wines is that the first glass buys the bottle; in other words, the wholesale price of the bottle is about the retail price of a 5-ounce pour of the wine. We found that many wine companies were intrigued by the concept, especially since sommeliers were judges and their criteria were not based on whether the wine was, say, the best chardonnay they’d ever tasted, but whether it was a wine they could sell with confidence at the price they would need to offer it by the glass. To the public, by-the-glass offerings are a convenience but to wine producers, placement on a by-the-glass list brings considerably enhanced visibility and helps them reach a much-expanded audience. 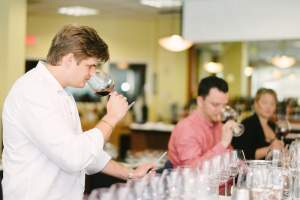 Young Leaders Rush Norton and Ian Beglau, at the time manager of Toro Toro at InterContinental Miami’, together with Jen Schmidt, then head sommelier at Zuma, were among the dozen sommelier-judges at the Seventh Annual Best in Glass Wine Challenge

Best in Glass was held in what was usually our “off season,” with judging taking place in the fall before the sommeliers got busy with their holiday demands. We compiled the results and arranged with our sommelier-judges to each choose two of the group of wines that won a gold medal for by-the-glass placement on their wine lists in the spring, leading up to the first events in VeritageMiami (out of a group of entrants numbering between 250 and 400 individual wines, fewer than 10 percent won a gold medal, but this was still a sizeable pool for the sommeliers to choose from). It was great marketing for the participating restaurants, got wineries coveted by-the-glass placements and gave VeritageMiami a way to get added press coverage just before the main events were held. There was another benefit for us as well – the gold medal-winning wineries each contributed two cases of their medal-winning wines to the festival and we featured the wines at our Interactive and Auction Dinners, further increasing valuable exposure for the wineries while providing the festival dinners with notably sommelier-approved wines. For seven years, it was a win-win for everyone involved but by late 2017 a difficult economy caused a reduction in entrants and in December 2017 we held the final judging for Best in Glass and poured winning wines for the last time at VeritageMiami 2018 when Jeff McGinnis and Janine Booth were our featured chefs.

In my next post I’ll wrap up this history of VeritageMiami, for now at least. There is still history to be created with future festivals, continuing with the final event of VeritageMiami 2021 – our Craft Beer Tasting at Wynwood Walls scheduled for October 28. See you there!