Hunger pangs, the chefs (and recipes) of VeritageMiami, Pt. 1

In addition to its mission to support the charitable efforts of United Way of Miami-Dade, our wine and food festival is about, well, wine and food! Since the first Great South Florida Wine Auction in 1996, the event has been driven by the art of pairing wine and food and we have been blessed over the years to have had more than 100 chefs participate in the event. As many as 25 restaurants would join the wine tasting that for many years opened each year’s festival and with the inclusion of the Craft Beer Tasting (more on that next week!) another 15 to 25 restaurants would be on hand. Sommeliers from top South Florida restaurants have always been important participants, especially for the nearly ten years our event included the Best in Glass Wine Challenge. There have been memorable meals with guest chefs at the auction dinner, but, always, the “big ticket” signature event for most of our guests has been the Interactive Dinner.

If you’ve never been, you have really missed something special. A guest chef (or, many years, guest chefs) have a cooking station on a raised stage and our guests, 500 to 750 strong depending on the year, have cooking stations at each of their tables. That means one cooking station for every eight or nine guests … more than 75 in total and one year, nearly 100! At each of these tables, the guests would elect (or often, bribe and cajole) their friends to be the chef for one of the three or four courses. Often a table would have an alpha cook who was happy to man the burner for the entire meal, and other tables ended up having everyone cook at least part of one of the courses. Mind you, the entire process is fueled by copious amounts of wine, some supplied by VeritageMiami of course, but many guests use the Interactive Dinner as an opportunity to bring wines from home to share with their friends. I have had the privilege to taste some amazing wines simply by strolling through the ballroom at this event!

Looking back over 13 years of menus (this post is limited to the first years of VeritageMiami, with another chef retrospective to come in a few weeks to cover the most recent years), some meals stand out and some chef experiences remain firmly etched in my memory. I’ll never forget the interactive brunch in 2002 (this was before we converted the event to a dinner). Rocco di Spirito, later to become a household name but then mainly known as a New York wunderkind chef, offered his lobster salad from Union Pacific restaurant and then Wayne Nish of March (also in New York) had us all making slow-cooked salmon with wild mushrooms. Then, veering away from the East Coast, the meal wrapped up with Dean Fearing, the chef at The Mansion on Turtle Creek in Dallas. 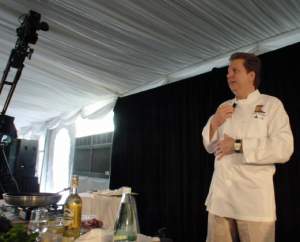 Chef Fearing sent us his recipe in advance so we could prep the list of ingredients, including a full bottle of tequila for each cooking station. I thought it was great having tequila as an ingredient with a Texas chef, and it was hilarious when he took the stage after the first two courses and had all the guests down a shot of tequila before they started cooking his plate. It completely set the stage for a joyfully informal occasion as he went on to tutor everyone in preparing “Crispy and Spicy Lamb Chops, Roasted Garlic Horseradish Sauce and Country Scalloped Potatoes.” 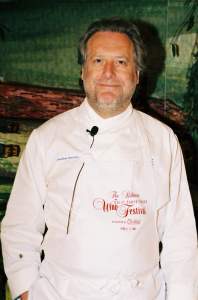 In 2003 I was very excited one of my heroes, Jonathan Waxman from New York’s Washington Park, was featured at the Saturday auction dinner (a classic rack of lamb) and then at Sunday’s interactive lunch insisted on making a foie gras taco with cherry and avocado salsa and a jicama salad. What looked great on paper was a mess to make as amateur chefs were trying to pan sear foie gras without burning it. And, when we all finally got the taco assembled, Jonathan instructed everyone to pick it up with their hands, and it promptly ran down everyone’s arms. Oh, but it tasted great!

Having multiple celebrity chefs at the interactive brunch (and, from 2004 on, the Interactive Dinner) was fun but with each chef trying to outdo his or her colleagues it got to be a sometimes-unwieldy meal. With 2005, we began featuring a single celebrity chef who could craft a cohesive menu by preparing all the courses. Usually, this meant three courses prepared by the audience under the chef’s guidance and then dessert prepared by the terrific team at our regular venue, the InterContinental Miami. 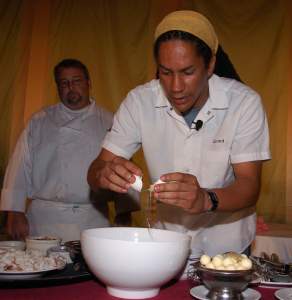 Govind Armstrong was our first solo celebrity chef, and he did a dazzling job (want his menu and recipes? You will find them here!) He was easy to work with and totally got the concept of creating a menu people can prepare with limited equipment: a single burner, a couple of pans, a few utensils and a lot of wine. We went from Dungeness crab fritters to pan-seared dorade to pan-seared beef medallions dressed up with mushrooms and foie gras. Govind was wonderfully personable and I thought he hit it out of the park with the menu. 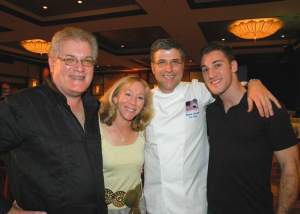 In 2006 Michael Chiarello joined us thanks to the strong connection one of our founders, wine retailer Mike Bittel, had with him. By 2006, Chiarello was a famous chef with a trio of restaurants in Napa as well as several television shows. Bittel had known Chiarello in the 1980s when he was a student at Florida International University’s acclaimed hospitality school then had become chef at Coconut Grove’s Grand Bay Hotel before opening Toby’s Bar and Grill. Named Chef of the Year in 1985 by Food & Wine Magazine, Chiarello got an irresistible offer to move to Napa in 1986 but stayed in touch with friends in Miami. Fortunately for us, Mike Bittel’s persuasion got him to come back with a terrific menu featuring his Cal-Italia cooking style. We got some odd looks from guests at the Interactive Dinner when they learned we would be making gazpacho garnished with popcorn (it was amazing). The whole menu was dazzling especially because Michael gave each recipe such a genial introduction (I’ve included his comments as well as the recipes here). And lest I forget, that olive oil cake is amazing! 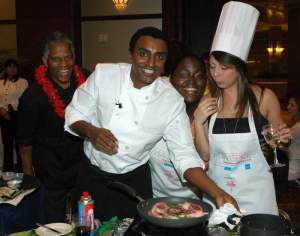 In 2007, the incredibly inspiring Marcus Samuelsson was the chef and, as I mentioned in last week’s post, he was funny, humble and filled with great stories. I spent quite a bit of time with him, including driving him to meet with students at Johnson & Wales University – the same student body that, year after year sends fabulous young chefs in training to serve as “sous chefs” on the floor with our guests. They were mesmerized by Marcus’s stories and the image of a person of color transforming America’s culinary landscape (as he continues to do). The adoring looks on those students’ faces as Marcus was preparing the dinner a few nights later remains one of the priceless perks of my job with VeritageMiami.

Marcus’s menu was everything we wanted – brilliantly eclectic, incredibly flavorful, easy to prepare and filled with heart and storytelling. To this day, it is one of my favorite festival meals: shrimp piri piri with chilled avocado soup; Kofta meatballs with okra tomato sauce (the sauce as good as the meatballs); lamb chops crusted with Berbere spice and shown off with mango couscous and mustard greens; tangerine consommé with honey ice cream. Awesome in every way, and I can share the recipes with you here! 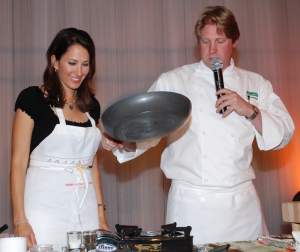 The chef for 2008 was a great friend of mine, Stephen Lewandowski, the then-executive chef of New York’s Tribeca Grill (yes, owned by Robert DiNero about whom Stephen could tell fun stories). Stephen and I had traveled together several times so I knew we’d get a supremely flavorful menu, cuisine he liked to call “earthy” and which I would describe as “heavenly.” His curried chickpea and tomato soup was surprisingly light but soul satisfying and I’ve continued to make it for friends to this day. His seared scallops (it was he who got me hooked on the then new concept of “diver scallops”) were pan-seared with corn, asparagus, morels (which due to a typo in the menu were called morsels) and a truffle-Madeira vinaigrette. This was one of the most complex-flavored one-pan meals I’ve had at the festival dinners, which reminds me I need to make this dish again! His black trumpet mushroom-crusted lamb loin with spring vegetables and risotto was another of those dishes where it comes together so quickly in the pan you can’t believe it is so deeply flavored on the plate. It was … it is memorable, and all the recipes are right here.

The last of the menus I’ll include this week is another that has lingered in my memory. I had met Michael Schwartz in the 1990s when I was restaurant critic for the Sun-Sentinel newspaper and he opened a dazzling seafood restaurant on South Beach called Nemo. He was a featured chef at the very first Great South Florida Wine Auction in 1996 after which I managed dinners wherever he was cooking. I was right in line at the front door when he finally opened his own restaurant in 2007, the now legendary Michael’s Genuine Food and Drink in the, at the time, nearly barren Design District. 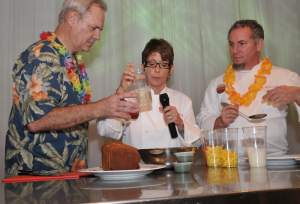 The restaurant not only featured Michael but also South Florida’s Doyenne of Desserts, pastry chef extraordinaire Hedy Goldsmith. I asked them both to headline the dinner and they pulled out all the stops with wild salmon crudo “cooked” with hot citrus oil and shaved garlic and hearts of palm, followed by exotic mushroom risotto. We had always stayed away from letting chefs do risotto because it’s time consuming, impossible to make with one pot (you need to cook the rice but keep the stock warm in another pan) and technically demanding. “No worries,” said Michael, “I’ve got this,” and he did – the dish was a knockout and (at most tables) turned out amazingly well. He finished with pan-roasted strip steak with a wonderfully fresh salad of fennel, radish, fregola (wheat kernels), arugula, orange and tapenade.

And after all this, Hedy came to the stage. Since I was the emcee, she insisted I join her at the chef’s demo table (I will never fight getting a hands-on dessert lesson) because she was worried about being in front of 700 people. You would never have known she was nervous once she started assembling her key lime cake with coconut anglaise that included a nod to the evening’s cocktail sponsor Bacardi, a fruit salsa with coconut rum. It was divine and we all wanted more as we staggered out of the ballroom that night. You can work your way through all four of Michael’s and Hedy’s recipes here, while I run to the kitchen to make a snack.

I’ll be back next week to chronicle the festival’s progression from 2010 onward. In the meantime, cheers, and please pass the salsa …