Written by VeritageMiami Director Lyn Farmer
2014 – Crush for a cause

I noted last week that we, at the now re-christened VeritageMiami, got a real showbiz shot in the arm when Richard Fain became our festival chairman and urged us into ever greater public outreach with the event. While 2013 had brought some exciting events along with the name change, 2014 had us pushing toward even more innovative ways to reach out with not only His Royal Corkscrew urging us on but also with the support of City National Bank.

CNB joined us in 2013 as the title sponsor of the Interactive Dinner and went on to become the presenting sponsor of the entire festival. It has been a rewarding relationship offering both stability and the inspired business acumen of CNB Chairman Jorge Gonzalez who, along with his wife Melinda also served three years as festival co-chair and has been an extraordinary fundraiser for the event. For our guests, the festival has been about fun as well as serving to harness support to the South Florida community. The festival has also proved to be a great vehicle for networking as it has served as an inspiration for events like United Way’s Young Leaders own interactive function BYOB (Build Your Own Brunch) and as an umbrella event for the Associates Legal Mingle that brought together young associates from Miami’s major law firms for a wine and cocktail prelude prior to a VeritageMiami event. 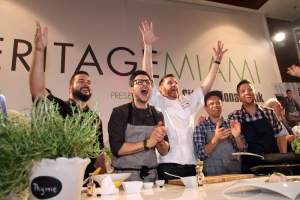 Another key relationship dating to 2014’s VeritageMiami was with Indulge Magazine, a luxury lifestyle publication of the Miami Herald. I served as the magazine’s beverage columnist for several years after its debut in 2012, but VeritageMiami’s relationship began in 2014 with the magazine’s annual food issue. Rather than a single chef being highlighted in the cover story, the February/March issue in 2014 featured five chefs, and partnering with the magazine, VeritageMiami featured all five as our guest chefs for the Interactive Dinner. It was a huge undertaking to coordinate and craft a menu with five terrific chefs, but what a great dinner we threw that year with (in order of appearance at the festival) chefs Todd Erickson, Alberto Cabrera, José Mendin, Cesar Zapata and Giorgio Rapicavoli.

The audience went crazy (or, more precisely, crazier than usual) for the chefs, going so far as to having a dozen audience members bid $100 each for a pound of the same rice Alberto Cabrera used in his Arroz con Mariscos (I’ll share all their recipes in a future post, I prom

ise!). And when we auctioned off a progressive dinner to visit each chef’s restaurant for a single course with a limo to take the group from restaurant to restaurant, the bidding got so high the chefs ended up auctioning off the dinner twice! 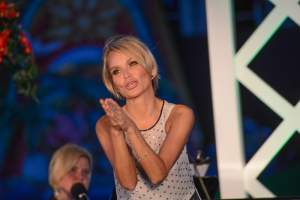 There isn’t much that could have topped that evening’s Interactive Dinner, but we did our best by staging the gala auction dinner the following night not in a hotel setting (and not repeating the previous year’s dinner in an airplane hangar) but by setting tables along the base lines of Marlin’s Park, the recently completed urban stadium that was home to Miami’s National League baseball team. As if the setting weren’t unusual enough, Richard Fain in his final year as the festival chair, arranged for one of Broadway’s brightest stars (and godmother to one of his ships in the Royal Caribbean fleet) Kristin Chenoweth to join us as the evening’s star attraction. It was, in several ways, an evening with the stars thanks to stellar auction lots,  Chenoweth’s moving performance and the stadium being open to the balmy April night sky. There were logistics challenges to be sure (dugouts framing auction lots? Why not!) but it was a wonderful evening for Miami’s wine lovers. 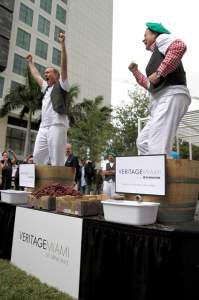 And, as if it were dessert after a wonderful meal, there’s one more memory I am compelled to share before closing this week’s recollections. Very much in keeping with the sense of innovation and fun that went with the VeritageMiami name, we sought out, how shall I say?, interesting ways to publicize the events. My favorite of all our efforts (and I’m not discounting the at times hilarious emails crafted for His Royal Corkscrew to send his wine slurping minions) was a press event we staged in downtown Miami with two large vats of grapes, and our normally very prestigious board members and trustees climbing in to crush grapes in a heated competition with each other. Think of that legendary scene when Lucy and Ethel stomped grapes on “I Love Lucy,” and then multiply it. Here we had Richard Fain, CEO of Royal Caribbean Cruises in a stompathon with Allen Morris, one of Miami’s leading real estate developers (and it turned out, our next festival chairman). We had partners of prestigious law firms, titans of finance and numerous others, and the spectacle definitely brought out the TV crews and newspaper scribes. We all went out afterward for real wine because they were just stomping table grapes and we were, by the end, dying of laughter and dying for a carafe or two of Napa cabernet. I miss those days.

Next week, we continue the saga and look at another group of interactive chefs, and another huge fundraising event for United Way of Miami-Dade.