By 2003, now in its eighth year*, The Biltmore International Wine Festival was bursting at its seams. There were so many lots at the live auction we needed two auctioneers (Fritz Hatton and Ursula Hermacinski) to handle them, and the festival featured another extensive lineup of top local and national chefs. While the auctions brought in donations, the chefs brought in people.

Once again, there was the split between the dinner dance and the auction, which was the largest yet (my favorite lot was a huge horizontal tasting – 43 different Bordeaux classified growths from the stellar 1982 vintage including all the first and second growths). Between the auction and the dinner dance more than 600 people attended the Saturday evening event, and this highlighted a point of contention among the partners: Baptist Health South Florida Foundation and United Way of Miami-Dade wanted as many people as possible to attend because that pushed the yields from sponsorships, ticket sales and auctions higher, but The Biltmore was keenly aware that they had limited space in which to stage an event as elegant as they wanted for their image. They wanted to cap the Saturday event(s) at 400 and the charities wanted more (in 2019, before COVID-19 changed everything, the Interactive Dinner and auction on Friday night had more than 720 attendees).

This was a classic case of an irresistible force meeting an immovable object and the result was a split, with the charities taking the festival to a new venue in 2004, the Hotel InterContinental in downtown Miami, while The Biltmore continued to do single-night food and wine events independently on a more intimate scale. The 2004 event, now retitled the Miami Wine & Food Festival, may have looked a little different on the outside but the basics that had been so successful were still very much on show, albeit over two days instead of three. 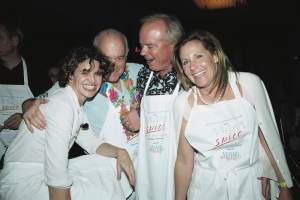 Friday evening again featured a huge wine tasting but now instead of having an interactive lunch on Sunday, we expanded the Friday event and created an Interactive Dinner, an event that quickly became a festival signature and the most coveted ticket for the weekend. Michelle Bernstein came back for an encore, joined by Douglas Rodriguez of Ola, and Didier Virot from Restaurant Aix in New York. It was a big shift moving from a lunch preparation to a dinner and it succeeded in large part through a huge effort by the InterContinental’s executive chef Alex Feher who with his team managed the dinner for years to come.

Saturday we staged the traditional auction dinner with another crew of great local chefs including Tim Andriola of Timo and Willis Loughhead from The Ritz-Carlton Coconut Grove joined by David Bouley from New York. The move was a huge success and set the stage for a partnership with the Hotel InterContinental that with only a couple of detours continues to this day. 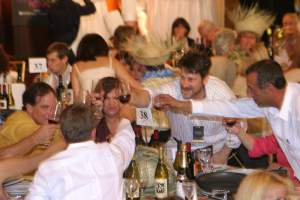 Guests at the 2004 Interactive Dinner

One thing we discovered in 2004 was a need to rethink how events fitted together. While the Interactive Dinner was a fantastic event, there were many people who only wanted to do the wine tasting especially younger consumers looking for a more reasonably priced wine option. With this in mind in 2005, we separated the two events and staged the wine tasting, now called “Taste and Toast” with dozens of wineries and a bevy of local restaurants participating, on Thursday night as a stand-alone event, though it was still at the InterContinental. 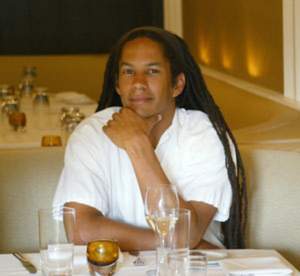 Chef Govind Armstrong, then of Los Angeles restaurant Table 8 and our celebrity chef in 2005

Friday the Interactive Dinner returned in the evening with a single guest chef. Rising star Govind Armstrong had made a name for himself on the Food Network, which was a growing influence on the chef culture in the U.S. (and would go on to compete on Iron Chef America). The audience loved having a single chef carry through three courses before the hotel kitchen did a dessert created by Armstrong and this set a formula we followed for many years of a single celebrity chef in the spotlight. 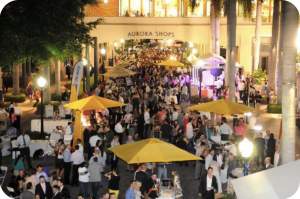 The Festival wasted no time in creating a splash, and staged Thursday’s wine tasting out of doors. After all, the event was held every year in March or April which is still cold up north but balmy and breezy in South Florida. Setting up the outdoor tasting at the large Merrick Park shopping complex in Coral Gables, more than 1,200 people came to “Taste and Toast.” 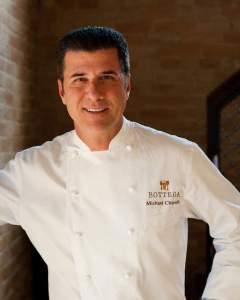 Friday night was devoted solely to the Interactive Dinner and the guest chef was popular Napa restaurateur, television chef and cookbook author (who actually had kicked off his career in South Florida) Michael Chiarello. Saturday’s dinner brought back the divide between auction and dinner dance utilizing two ballrooms at the InterContinental and longtime auctioneer Fritz Hatton was joined by Sotheby’s top wine expert Jamie Ritchie for a hugely successful auction. Spread now over three days and nights, the event was glamorous and lucrative for the charities but also extremely demanding on the charities’ event staffs. And with that thought, I leave you to a glass (or bottle) on your own before we pick up our story next week (and I’ll bring along some recipes then!)  Cheers!

*A footnote for detail geeks:  if you’ve been keeping track, the festival numbering seems a little wonky up to this point. That’s because the auction began in 1996 and The Biltmore International Wine Festival began in 1997 and the two fully joined together in 1998 when, for the detail oriented, we billed it in some materials as, “the Third Great South Florida Fine Wine Auction at the Second Annual Biltmore International Wine Festival.” This got terribly confusing, so in 2003 we essentially skipped the confusion of having the eighth auction at the seventh festival, and just called it the Eighth Festival – there was no Seventh festival per se. And when the event was renamed and moved from The Biltmore to the Hotel InterContinental in 2006 it was The Ninth Annual Miami Wine & Food Festival, and the numbering was consistent from then on. Well, mostly, but that’s another detail for a future post!