In my last post I noted how much fun we had at the 2014 Interactive Dinner when, after having a single featured chef at the Interactive Dinner for many years, our partnership with Indulge magazine brought us five chefs for the event. That meant five courses rather than our usual four, and gave us a lot of buzz around town for joining the magazine in celebrating a stunning group of young chefs.

In 2015, Indulge wanted to again feature a group of chefs on the cover of its food and wine issue and we were all for that because it brought us an opportunity to highlight an important group of female chefs driving a food renaissance in South Florida. It was particularly rewarding to focus not only on young star chefs but to salute another generation as well in featuring Cindy Hutson of Ortanique who had blazed a trail for women chefs when many of the other chefs on the dais that night were toddlers.

Our cross-generation lineup included not only Cindy, whose signature Caribbean-inspired takes on classic dishes had made Ortanique one of the most celebrated restaurants in South Florida but, a generation younger, Eileen Andrade who brought a wealth of experience (her family-owned Cuban culinary icon Islas Canarias) to her new Caribbean style at Finca Table & Tap. Adrianne Calvo has gone on to national visibility through a number of Food Network programs (and who, incidentally, is our solo headline chef at the Interactive Dinner this year) but even six years ago, she was a powerhouse who packed in huge audiences nightly at her Chef Adrianne’s Vineyard Restaurant and Bar. Paula DaSilva has helmed some of the top kitchens in South Florida – she was at the seafood temple 3030 Ocean in Fort Lauderdale when she joined us in 2015 and now is at The Ritz-Carlton, Fort Lauderdale, and Dena Marino dazzled us with fresh pasta from her Coral Gables restaurant MC Kitchen.

I have to say this group of five chefs is particularly memorable to me because together they crafted a menu of five complimentary dishes that were also wonderfully adapted to cooking under the rather trying circumstances of the Interactive Dinner. Remember, guests are cooking dinner along with the chefs, so you have basically 75 individual pop-up restaurants in the InterContinental hotel ballroom that night, each table equipped with a single butane burner, one skillet, one pot and a few utensils. It’s a huge tribute to hotel executive chef Jhonnatan Contreras and his team that they can deliver between 75 and 90 mis en place trays for each course in a timely manner, and a tribute to our guest chefs (and yes, the VeritageMiami team for sure) that this all comes together in a timely fashion. Amazing as it always seems in retrospect, our audience is able to actually have a full dinner plated and served, a dinner they cooked for themselves! 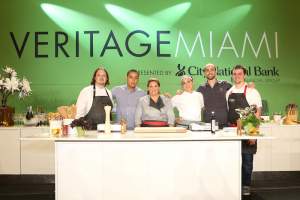 I confess to having been skeptical the previous year that we could make this work with multiple chefs, but it worked well and then worked even better in 2015. It worked so well in fact, that the following year, 2016, we did it again by inviting not five but six chefs to join us for the Interactive, and just to make it interesting, we asked the chefs to team up so there were three courses, each created and coached by two guest chefs. Chefs are known for being leaders, not followers, and it’s a tribute to our great teams that they not only got along well but that they created an absolutely dazzling, cohesive menu.

This was an unusual dinner because we had decided to move VeritageMiami from being a March or April spring event to taking place around harvest time in the autumn. We didn’t feel we could go 18 months or longer from the spring, 2015 festival to an autumn event in 2016, so we created a second Interactive Dinner in March 2016 as a bridge event.

Our 2016 teams featured some of South Florida’s most exciting new chefs (and by new I don’t mean they were inexperienced, only that each was the executive chef at a new restaurant). Nicole Votano had just opened an organic, vegan-inspired restaurant on South Beach called Dirt and Julia Ning was developing but hadn’t yet opened a restaurant with César Zapata of The Federal (César had been in the original “chef gang” in 2014) – that restaurant eventually became the still-popular Phuc Yea.

Team Two featured two chefs who have gone on to help redefine casual dining in Miami – Brian Nasajon, whose Beaker & Gray is an amazing location for comfort food and upscale craft cocktails, and Justin Flit, who had recently opened the transcendent pizza and pasta restaurant Proof, then the seafood-oriented Navé. The final team brought together Alex Chang (then of Vagabond and now based at Quiquo in Los Angeles) and Bradley Kilgore, whose Alter is among the most nationally acclaimed restaurants in Miami. The dinner they prepared on March 11, 2016 was memorable not only because of how well they coached our audience in making delicious dishes but how inventive these collaborative dishes were. 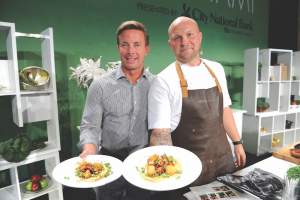 The bridge event, dubbed “The Spring Edition,” was successful at maintaining our audience’s interest in VeritageMiami, at least until Hurricane Matthew barreled down on South Florida on the October weekend when we were scheduled to debut the new autumn version of VeritageMiami. Strangely, our effort to move from spring to fall ended up moving the event to winter when, unable to book four consecutive days for a cohesive multi-day festival as had always done before, we were forced to spread the individual events out over three months. The Interactive Dinner with superstar chef (and the season 13 winner of Bravo’s Top Chef) Jeremy Ford moved to January 2017, the Craft Beer Tasting to February and the Fine Wine Tasting at Merrick Park to March. And here we made another change, moving away from yet another dinner for the auction and testing the waters for a less formal brunch event, also held in March.

The takeaway from 2017 was that, despite our trepidation of holding the festival over such a long period instead of consecutive days, it worked out remarkably well. The audience welcomed the opportunity to spread out their attendance and many actually ended up attending more of the events than they did when they were clustered together. And for the VeritageMiami staff it was a much more realistic use of planning time and energy to stage the events on separate weekends. This separated approach is what we’ve followed every year since.

In the next post, I’ll share some of the best recipes from the “chef gangs” mentioned here, and I want to get back to some wine commentary with some BIG news – that is, our “Best in Glass” wine challenge that was staged for the last time in 2017.