Along this historical journey, you have read about us as The Great South Florida Fine Wine Auction, The Biltmore International Wine Festival at Coral Gables, The Biltmore Great South Florida Wine Festival, the Miami Wine and Food Festival and the United Way Miami Wine & Food Festival. Ampersands have come and gone (and returned), but one word has always been in our name: Wine. We started as a “wine auction,” and continued as a “wine festival” and while we always had a strong component of food in both concept and execution, it was wine that always took center stage. And then we became VeritageMiami and suddenly, no wine, no food, no festival – at least not in our title though all those elements were in the event more strongly than ever.

What’s up with that? 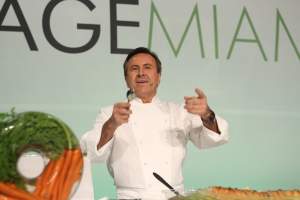 In 2013, Dan Hanrahan ended his two-year term as festival chair and ceded the spot to Richard Fain, the chairman of Royal Caribbean Cruise Line. Fain had a reputation as a marketing genius, and he wasted no time challenging the staff and the festival board. We may have been the only wine festival game in town when we began, but by 2013, the South Florida charity landscape was littered with wine and food festivals. Fain wanted a change in name if not in mission, arguing we needed a way to set ourselves apart from the now-crowded field. His idea, in a nutshell, was, “We are different, let’s sound different.” We spent weeks in brainstorming sessions with marketing gurus around the country and Richard constantly prodded us to think not so much of what we were (which he thought was fine), but how we wanted to be perceived: fun, imaginative, and wine focused. The emphasis needs to be on perception, he urged.

I don’t remember the exact moment the name Veritage hit us, but it wasn’t from one of the outside consultants (though I don’t estimate their value in getting us thinking outside the wine box). Several of us were sitting in Tammy Klingler’s office (she was the then Senior VP of Marketing and Communications at United Way) musing on a way to convey wine without using the word. We got talking about a similar issue the California wine industry had in the trying to say they were making red blends like those produced in Bordeaux, but couldn’t use the term Bordeaux, and the idea hit us.

Napa producers were using the term “meritage,” and having endless difficulties getting people not to pronounce it “mer-it-ahzh” as if it were French. We jumped on the term “Veritage” and we were fine giving it a French accent and leaving in some vagueness as to whether it referred to veraison, the term used to indicate the onset of ripening in wine grapes (or, more precisely, the moment when grapes change color from green to either gold or purple), or grape variety. I confess to being happy to let people also confuse the word with “verity” (which itself is an English word derived from the French word for truth), vernissage, a word that in the art world denotes a preview of an exhibit, or even more tenuous links with winey words like viticulture or vinification. We embraced it all, and Veritage was born … and quickly compounded into VeritageMiami as a single word to brand the festival.

Working with an outside graphic designer, our own design team developed a logo that replaced the paintings that had once represented the festival with a single design that came to promote the festival every year – a hybrid palm tree and cork screw. It was only later that we hit on the full logo package of a unique springtime green and using the typeface Futura (and its several permutations) to make a consistent graphic representation. 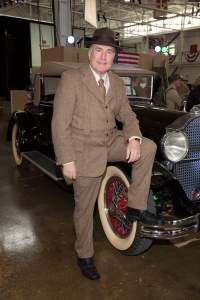 With the name chosen, Richard Fain continued to press for a way to underscore the fun side of the festival. One way was to havewhimsical titles for many of our volunteers as if they were all characters in a wine-fueled version of Alice in Wonderland (or more to the point, Through the Wine Glass). Richard became “His Royal Corkscrew,” our event chairs were Masters of Fundom of the First Night, Second Night and Third Night (we were still staging the festival on consecutive evenings at that point). I was to become The Imperial Imbiber and was charged with writing elaborately punny blog posts around the time of the festival (with many of the phrases looking in hindsight as though they were constructed while I was very much under the influence of a cru Bourgeoise.) 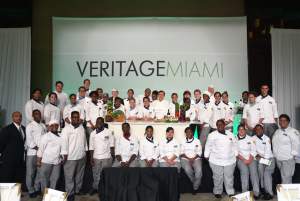 Fain wanted us to not only think outside the box, but stage the event outside the usual venues, but I should note at this point that was not the main reason we held the 2013 Interactive Dinner at the Marriott Marquis hotel in downtown Miami and not at our traditional venue at the InterContinental Miami. The reason we went to the Marriott Marquis was because we could get Daniel Boulud to be our guest chef if we held the event at the hotel where he had a namesake restaurant, and while it was a smaller space that hampered mobility and reduced the number of lots at the silent auction, the dinner was brilliant and the evening was a huge success. 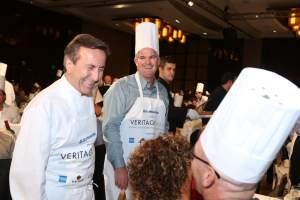 Working with Daniel Boulud was a partnership made in heaven for any wine and food lover. Boulud was an extremely polished guest chef, a dream to work with between his wonderful menu, stunning organization, and innate understanding of the way an interactive event could work.  He was a culinary idol of mine, and I relished the chance to work with him on making the event memorable, and for our volunteers from Johnson & Wales University’s culinary school, he was a dazzling taskmaster. I will never forget the enormous amount of time and coaching he gave the students and his winning way with our audience.

Where we did break out of the venue box was in staging the Saturday dinner that year at the Orion Jet Center, with the huge airplane hangar decorated as if it were a stage set for a World War II film. This is where Richard Fain’s keen instinct for marketing (and, I have to say, his show business flair) was evident in a magnificent way. His Royal Corkscrew had made the mark he intended, and it put VeritageMiami on a more visible, fun-filled course, something we’ll explore further next time!